In the moments before awakening this morning, I heard a deep voice speak. The words, “Saffy will begin her spiral and leave soon.”

Was it just my mind speaking its attachment to the beautiful, furry black compassion and companionship she so embodies? Or, was it the voice of prophecy? Was the day nearing when I would lose her physical presence? She has been doing so well on our walks. Her limp seems to disappear in the deep woods. She is aware and observant. She pokes about and then flies down the path to catch up to me. She is the one who led me to my love of the forest. She was the reason I began looking for dirt paths and delicious scents in the first place.

Could she be nearing the time when what to my sense of touch will appear to be absence? My eyes would not see her, at least not in the same way, so she would seem to be gone, to be not here. I feel her presence in the simple clink of her dog tags. They tell me where she is and what she is up to. What would it be like to hear silence instead?

As I allowed myself to experience the potentiality, I felt an empty hole, an animal, primal ache swirling where moment before my belly had been.

Mind explored two possibilities, but there are an infinite number. Sharing my experience with friends took us all deep into experiencing. We were immersed in the actual experience of being so open to life that we live as vulnerability, live it deep into our cells, to the core of our being, As we talked Charis, who was standing beneath a tree, was visited by a big fluffy cat, and then as she walked back towards work another came to play. Each cat swept figure eights around her legs and then positioned itself on its back on the top of her feet. St. Francis of Assisi comes to mind. 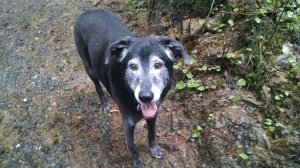 When Ken died almost four years ago, Saffy almost left with him. She ached for her master, her buddy, her friend. One evening a couple of months after Ken left his physical body, I sat on the deck watching the sunset and glanced over at Saffy. She was laying at the edge of the lawn with her front paws on the pasture grass. I noticed the energetic signature of Ken, crouched down next to her, stroking her and talking with her. She was looking up at his face, totally in attendance. That was the night I knew she would be staying around for awhile.

So which experience is better—feeling into grief or the experience of other-dimensional form? Both exist Here. Both are consciousness manifesting. Both are real.

In the Now, infinite manifestations present themselves. That is true whether the Now is recognized or not. Carnal mind sees death, dying, loss—sees the duality of this, not this, a world to resist or lose one’s way within. Non-separated, undifferentiated mind holds inherent to it, the impossibility of death, dying, loss—of anything that is not all-inclusive Now, is not immortal, perfect. On planet Earth, both manifest, both are included. Exclusion delays the realization of the Whole Truth and life lived as Now. Sitting in the still point of this that is unfolding allows the Presence to impart Its glory in every more mind-expanding, mind-shattering ways.

Ram Dass, I quote you so often. You had it right—three simple words that leave nothing else to say—Be Here Now.